skip to main | skip to sidebar

B & W Pics of Barrington 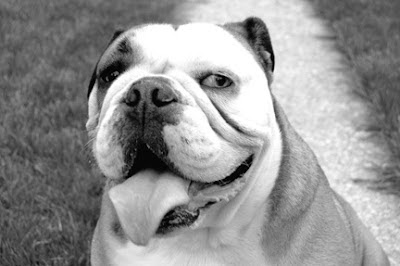 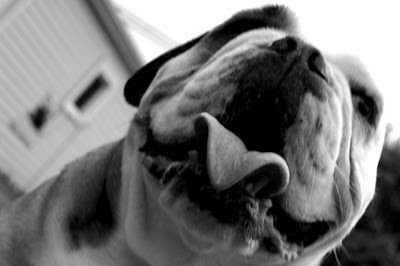 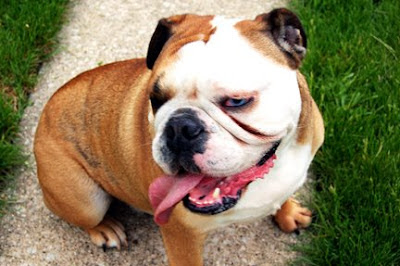 I Bet You Can't Touch Your Nose With Your Tongue! 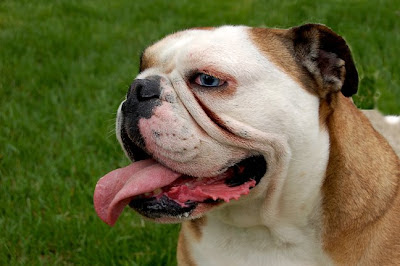 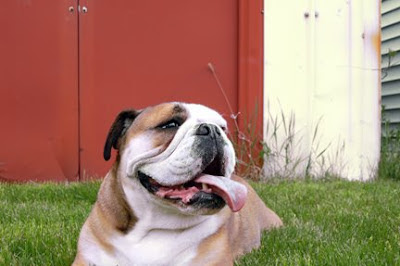 The Bulldog comes in a variety of colors and ideally has a smooth, short coat. The colors, in order of desirability, are brindle (especially red), red (like a chestnut horse), white, and fawn (often with white markings on any color, or piebald).

The bulldog's specific traits can (but not always) contribute to some specific health issues. Breathing issues can be prevalent in the breed due to the shape and the shortness of muzzle. Most noticeably, bulldogs are known to snore loudly.

Like all dogs, bulldogs require daily exercise. If not properly exercised the bulldog could gain weight, which could cause health problems relating to the lungs and heart. Bulldogs are extremely sensitive to heat and great care should be given to the dog during overly warm periods. During these times, the owner must ensure that the dog has plenty of shade and water, and bulldogs must be kept out of standing heat.

While some canine breeds have their tails cut soon after birth, Bulldogs are one of very few breeds whose tail is naturally small and curled, and can appear as though they do not have one. A longer or "gay" tail is a serious fault in a show bulldog. The tail of some can be so tight to the body that regular cleaning and maintenance is recommended.

The term "bulldog" was first used around 1568 and might have been applied to various ancestors of modern bulldog breeds. It has been theorized that Bulldogs were bred in England as a cross between the mastiff and the pug, although their genetic origin is debated.[2]

In the 1600s, bulldogs were used for bullbaiting (as well as bearbaiting), a gambling sport popular in the 17th century with wagers laid in which trained bulldogs leapt at a bull lashed to a post, latched onto its snout and attempted to suffocate it.[3] Bulldogs were not needed after these sports were outlawed, and so the original athletic bulldog was crossed with pug. The outcome was a shorter, wider dog with a brachycephalic skull. Though today's bulldog looks tough, he cannot perform the job he was originally created for, as he cannot withstand the rigors of running and being thrown from a bull, and cannot grip with such a short muzzle.